The Old Suburb is a unique spot on the map of Gdańsk. The heart of the district is Embankment Square (Plac Wałowy), where the pre-war architecture coexists with green trees and recreation areas at the bastions.

Despite the fact that the Old Suburb is located in the close vicinity of the Old Town, the district is free from hustle and bustle of the city and also from crowds. Tourists who get here can admire historical buildings which largely avoided destruction during the Second World War. The space of the district has been also shaped by nature: old, tall trees growing at Embankment Square, bastions covered with grass, where walking tracks and bicycle lanes can be found along with peaceful water of the Old Motława at the Żabi Kruk harbour. These elements contribute to the authentic and cosy atmosphere of the Old Suburb.

While walking along the streets of the district, especially at weekends, when the traffic is low, you can get an impression that the time has stopped there. In fact, so far forgotten and neglected, the Old Suburb has entered its transformation process. Embankment Square will be revitalised and a fountain will be restored at its central point, as it used to be there long time ago. The social space has been already undergoing some changes too: every year the FETA International Festival of Street and Open-air Theatres is organised there, the local community has become activated and one of the best examples of this process can be activities of the Society of Storytellers of the Lower Town of Gdańsk.

The UrbCulturalPlanning project has been involved in the transformation and activation of the Old Suburb by numerous cultural activities. One of the objectives is active participation of young people in a dialogue about strengthening bonds inside the local community and shaping the common space. To achieve this objective, pupils of Gdańsk schools are going to develop an urban game in a form of a website (GameBook). The storyline is going to be based on the stories told by the inhabitants of the district, collected by the Society of the Storytellers of the Lower Town of Gdańsk. The game will be referred to the post-war history of the Old Suburb, memories of the inhabitants, architectural assets of the district and its natural resources, such as greenery and water courses.

The following list of resources comes as a set of memories and stories told by the inhabitants of the district, archive materials and the most important facts about the Old Suburb. It is a concise guidebook addressed to the young people – developers of the Game of Gdansk. 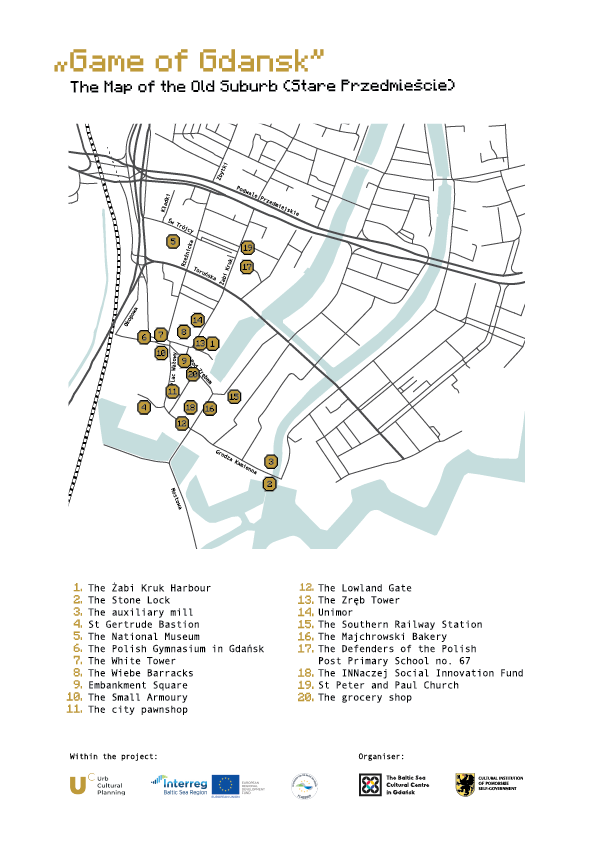